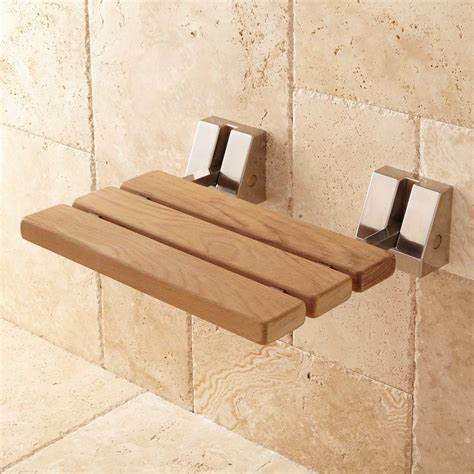 Shower accessibility is key for safety and independence.

For this very reason, we feature a large category on Accessible Showers.

The discussion here will focus on one primary accessible component to accessible showers; the chair or seat inside the shower.

There are many types of shower seats with many suppliers and sellers of such seats.

Our goal in this discussion is to describe the different types of shower seats that are out there so you will be well-informed when making a decision for which seat to purchase.

In a following discussion, we will provide Purchasing Options for the different seats so that we can get you to the finish-line of practically accessing and hopefully purchasing the items that will enhance your safety, accessibility, and independence.

Important sidenote: Shower chairs are generally not covered by Medicare because they are not considered Durable Medical Equipment. Click on the link for Medicare Coverage to learn more.

Types of Shower Chairs and Seats 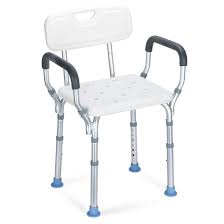 A shower stool is the more compact version of the standard shower chair.

The shower stool comes in various options including a standard stool as well as folding options.

Shower stools clearly compromise the support that a standard shower chair provides so make sure to weigh the pros and cons of support vs space/compactness before deciding between the options. 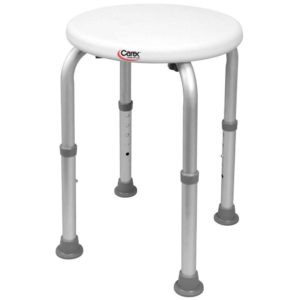 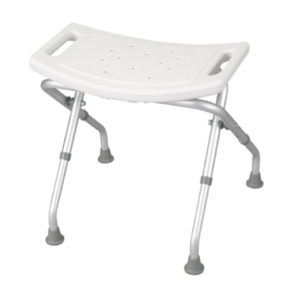 Shower benches have similar features to standard shower chairs, with the primary difference being that the seats on the benches are longer than on the chairs.

We have a more detailed discussion on transfer benches back when we discussed Shower Entrances and how to maximize accessibility for getting into a shower.

When a transfer bench is used for getting into the shower, it can then be used as the shower chair while taking the shower as well.

Check out this video for a visual explanation on how to use a transfer bench. Keep watching to gain additional tips for keeping the water inside the shower area and avoid spreading everywhere while using the bench. 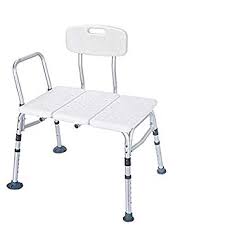 A rolling shower chair is almost like a simplified shower wheelchair.

It features wheels which allow the user to transfer into the chair prior to going in to the bathroom/shower area, then rolling right into the shower itself, then taking the shower while still seated in the chair, and finally rolling back to wherever the user desires. This allows for preparing for, changing, and completing the tasks involved in showering with minimal transfers.

There are a variety of styles of rolling shower chairs which we will discuss in our following discussion about purchasing ideas for shower chairs and seats. 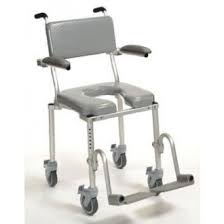 A fold-down seat is a more permanent seat solution which is installed directly into one of the shower walls and folds up/down on hinges. This style is nice as it takes up less storage space because it folds up on to the wall, but keep in mind its more permanent features.

Those are our most commonly found and used shower chairs and seats.

For more information, check out the discussion by Chair Institute. We have used quite a bit of their info to inform our discussion here.

For some practical advice, check out our following post which features our researched Purchasing Options for shower chairs and seats.

That’s that for Accessible Shower Chairs and Seats Guide.

To safe and happy homes,

Golda, a licensed Occupational Therapist and Certified Aging in Place Specialist (CAPS professional) was inspired to specialize in an area which she felt would increase her clients’ quality of life beyond typical therapy treatment sessions. Golda embraces the idea of increasing clients’ abilities to reside in their homes barrier-free as providing a level of quality of life which cannot be matched.  Follow along with Golda on her journey of creating a comprehensive resource center for home accessibility modifications here at adapttostay.com.

ADAPT to STAY, All rights reserved 2019.